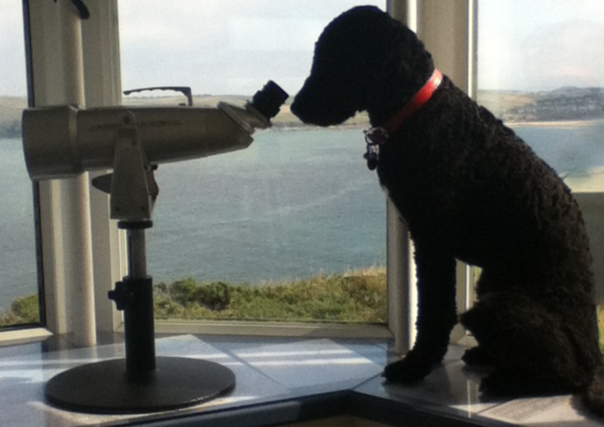 Have you ever wondered what it takes to be a therapy dog? Here Mo Read outlines Rio’s journey: from a bit of a naughty boy to a proper good citizen and so much more!

Rio is a Spanish Water Dog. Born in Wales on 16th Sept. 2015. His official name at the Kennel Club is Kincara Bobby's Child but when he came to live with us at the age of 10 weeks we called him Rio, as a short form of Rioja, the Spanish wine! We have full details of his parents, grandparents and great grandparents, who all have splendid names! His Father was Lendever's Fervent Mind, his Mother Prizelands Sweet Harmony, whilst his paternal grandparents were Leonneus de Ubrique of Maravilla and Lendevers Bolshie Madam and maternal grandparents Josalyn Galeno and Hillin Amigo Mia for Prizelands. Rio does have a certain aristocratic air about him!

We had previously had two Golden Labradors; they were gorgeous but not very obedient! Our fault, not theirs; we should have trained them.
We decided to take Rio to training lessons to get his Kennel Club Good Citizens awards. In the bronze class he peed up the walls, he peed over other dogs, he barked and barked but he managed to get his Bronze and Silver Awards within a few weeks. Getting his Gold Award took a bit longer - just over a year! He was very good at some training exercises and terrible at others. For example the dogs had to walk in a figure of eight round bowls containing food without touching them. Rio is not a good eater; we have to bribe him to eat sometimes with roast chicken, liver or sardines in oil. Even though his lessons were at lunchtime, he would ignore the food in the bowls. The Labradors on the course failed every time because of course Labradors love their food. On the other hand, for one of the exercises Rio had to sit whilst I walked away. I would then call him but when he was about three metres away from me I would tell him to sit. Instead of sitting he would bound up to me and then looked surprised when I would not give him a treat for being a good boy. His face said it all - I was sitting, you called me, why on earth should I sit again??????????

Eventually he got his Gold Good Citizens award and it was time to see if he could become a PAT (Pets as Therapy) dog. He had to be assessed and it is fair to say he was truly brilliant. At one point, the assessor dropped a tin tray on the ground behind us. I jumped but Rio just turned round and looked at the assessor as though to say 'Why did you do that? It was a silly thing to do.'

So how did Rio come to CLEAR? I was told by a Police Officer that CLEAR was a good, worthwhile charity to support. I was impressed by Simon Carpenter, the then CEO, and also the therapists so Rio started to visit the offices. He loved it and the children loved him. He loves a cuddle, as we all do, and he senses when someone is unwell. As well as visiting CLEAR, in normal times he goes to Bodmin Hospital. Only twice has he jumped on the bed. Once when an elderly, blind lady who had to lie on her back in bed could not reach to stroke him and once when he got no reaction from a 40 year old man who had had a major stroke. Rio visited that man regularly until he was well enough to go home.

You may have met Rio at fundraising events. He is happy to sit, be stroked or cuddled. He has the softest ears and children who do not like dogs have been persuaded to stroke them.

His latest success was a retired SAS soldier who was frightened of dogs and would not go into the same room as one. He is now happy to walk with Rio, to stroke him and to play with him.